We sometimes hear questions or concerns from several sources at the same time about current conservancy or environmental topics in the Clear Lake Township. We often look at each other and say, “Ask Bridget!”

Q.: Several folks: What is flying around by the thousands at dusk? Are they dangerous? What can we do about them?

Wondering what we are seeing? Check out this video from Nate Striker.

A.: Bridget: We are seeing the emergence of the burrowing mayfly (Hexagenia limbate), one of the most widespread mayflies in North America that is well known for its key role in monitoring the health and water quality of a water body. Mayflies are believed to be an ancient lineage of aquatic insects originating more than 300 million years ago. The burrowing mayflies are well-known for their importance in fly fishing and their massive synchronized mating flights, which many of you have observed and reported.

The giant burrowing mayfly is widespread throughout North America and reaches its greatest densities in the Great Lakes region. They do not bite or sting. They emerge with a single goal – to mate.

Mayflies start their lives as eggs on the bottom of lakes, streams, and rivers. They hatch into the nymph stage and have a long, cylindrical body with gills along their abdomen and three tails. They remain in this stage for about a year, pictured below.

During this stage of life, they are sensitive to water pollution and will not survive in lakes, streams and rivers with poor water quality. Our Water Quality Committee has been collecting macroinvertebrates or “big bugs” found in the water for many years. It is always a good sampling day when we collect and identify mayflies!

Their life cycle continues as they emerge from the water and grow wings. This phase can take as little as 30 seconds as they break free from the water and shed their nymphal skin. As newly emerged adults, they are not reproductive just yet and are known as subimago. They find shelter and shed their final skin and become sexually active adults, called imago. Once able to breed, they spend their short adult life cycle finding a mate. 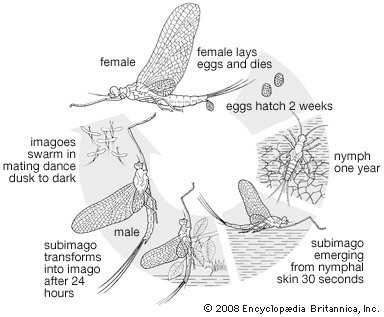 In the later afternoon and into the evening, the males will gather and rise and fall in plumes hoping to attract a female. The male and female meet in flight and clasp using their long forelegs. Once mated, the female will return to the water to lay her eggs. One female can produce thousands of eggs with an average of about 4,000 sinking to the sandy bottom after being laid on the water’s surface. The eggs overwinter and hatch in the spring as nymphs. The entire lifespan of adults is no more than two days, during which time they are unable to feed. They emerge only to reproduce and truly embody the phrase, “live fast, die young.”

Mayflies are a major contributor to ecosystem function, water quality monitoring, and the fly-fishing community. In the Great Lakes region, where mayflies occur in high densities, the insect plays an important role in an aquatic ecosystem. In all life stages, the mayfly is a significant source of food for fish, other insects and in some parts of the world, for humans.

Mayflies have been known to cause problems in some areas where large numbers may create driving hazards and dangerous road conditions. In the Clear Lake Township, they pose no danger, only a mere inconvenience in their short-lived life. Attracted to light, you may find them by the hundreds on your windows, siding, and even indoors, but as a sign of excellent water quality, maybe they should be celebrated! From research we have done, we recommend cleanup after they are dead and using methods not involving water. Brooms, brushes, and leaf blowers may do the trick. They tend to have foul smell and may create a soupy, stinky mess when mixed with water.

This periodic short column allows Conservancy Executive Director Bridget Harrison to give all of us the same answer at the same time. If you have or hear such questions or concerns, let Bridget know by email bridget.harrison@clearlakeconservancy.org or phone call, (260) 527-1072. Also, help us by spreading the word about this source of reliable and timely information about community and environmental questions in the Clear Lake community.