Q.: Numerous people from the community have asked about recent news reports about testing to tap into the Michindoh Aquifer to supply water to several large communities. How does this affect Clear Lake Twp. and Watershed? What position, if any, is the Conservancy taking on the issue?

A.: Bridget: The Clear Lake Township Land Conservancy Board is following the issue closely but has not yet taken a position on the topic. This is what we can tell you about what we are observing from a number of concerned and knowledgeable sources.

The Michindoh Aquifer contains groundwater under porous land in three states near Clear Lake Twp.—Ohio, Indiana and Michigan. The Aquifer covers more than 2 million acres, supplying water currently to over 400,000 people in nine counties across these 3 states, providing 75 million gallons daily [see map]. The Aquifer’s water use supports public water systems, private systems, and agriculture or industrial purposes. A private business, Artesian of Pioneer, proposes to sell water it draws and purifies from the Aquifer to several Ohio communities, including many Toledo suburbs, which announced in 2017 that it is seeking a source other than Lake Erie.

Concerns are that such commercial sales will diminish water currently tapped from the Aquifer by municipalities, individuals and businesses potentially reducing sources for the future.

The Steuben County (Indiana) Commissioners are among those who have voiced such concerns. There have been well-attended meetings in several communities including Bryan, Montpelier, Edon, Edgerton, and Pioneer in Ohio and also in Angola, citing opposition to tapping into the Michindoh Aquifer for commercial purposes such as those Artesian of Pioneer has proposed. Several state agencies are also involved in reviewing the proposal, including the Ohio EPA and Ohio Department of Natural resources.

The Conservancy supports the close study of this proposal and an understanding of its impact on the water sources under our watershed. Extensive coverage of the topic has appeared recently in several newspapers such as the Herald Republican and in the Bryan Times.

An information session with hydrologist, Jack Wittman, is planned for Tuesday, August 21st at 10 am at the Angola Training Center located at 306 W. Mill St.

We will continue to follow the potential impact on the watershed the Conservancy was formed to protect and preserve. 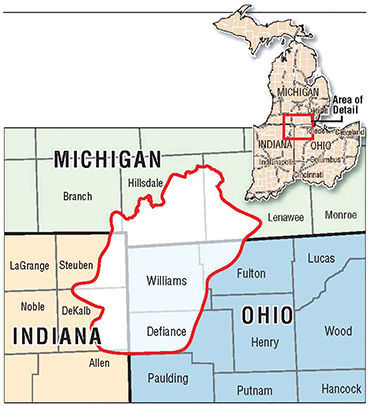 Bridget attended a meeting organized by the Ohio Environmental Protection Agency in March. The purpose of the meeting was to explain the process that the Ohio EPA uses to review applications to develop public water systems. Download Bridget's meeting summary here.